I don’t know if this has aready been posted – But if not
Great Interview with Mike Landau in “Performing Musician” Mag, plus it’s quite a long interview, about four pages – with detailed breakdowns of Mikes various Rig’s, Amps and Guitars. Very Cool interview, discussing his approach to sessions and Live Gig’s.
Well worth Checking out.
Steve. 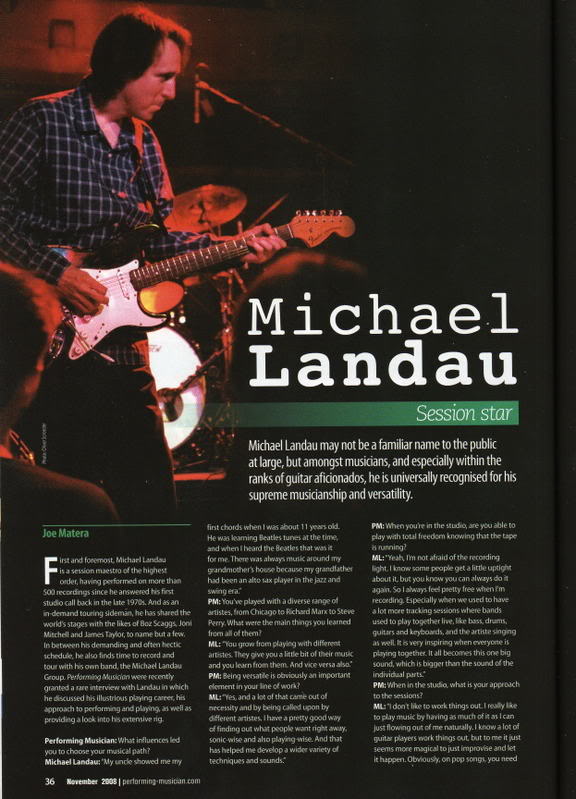 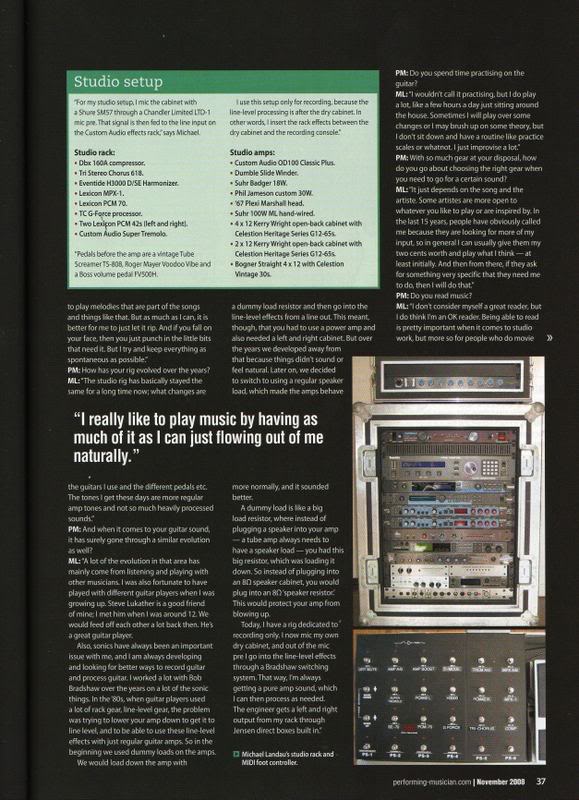 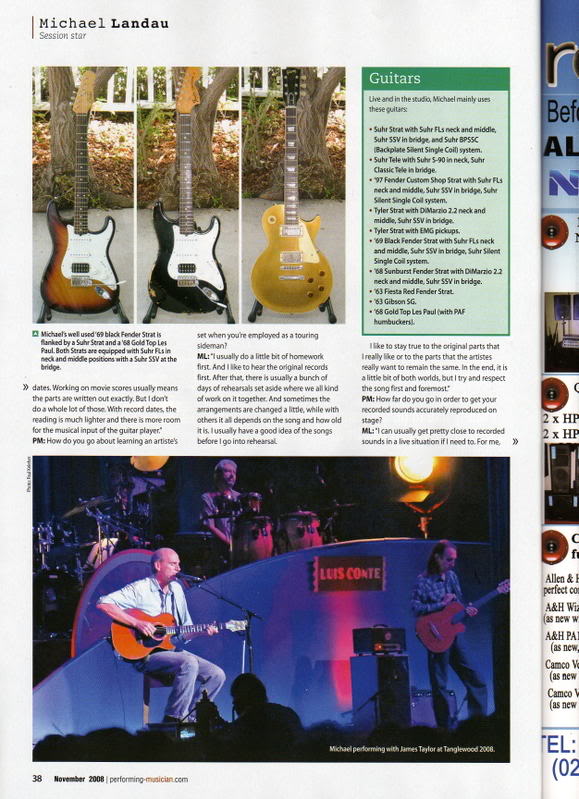 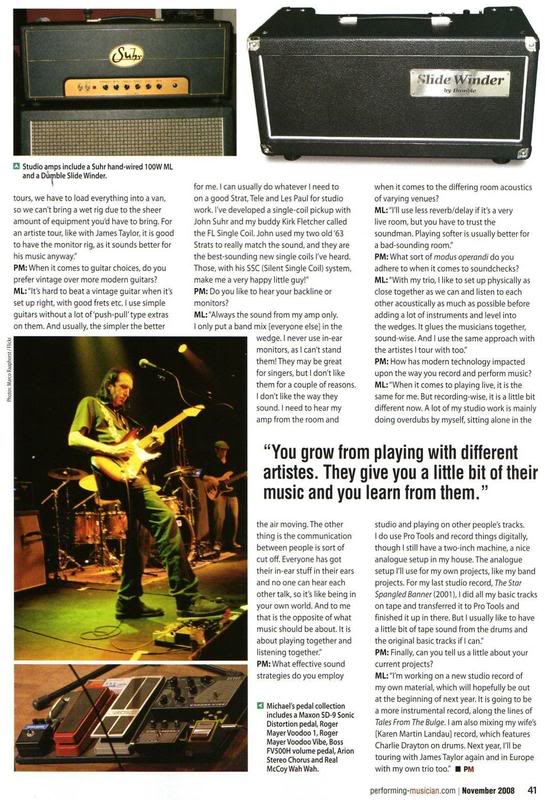 And here is the digital version

Michael Landau may not be a familiar name to the public at large, but amongst musicians, and especially within the ranks of guitar aficionados, he is universally recognised for his supreme musicianship and versatility.

First and foremost, Michael Landau is a session maestro of the highest order, having performed on more than 500 recordings since he answered his first studio call back in the late 1970s. And as an in-demand touring sideman, he has shared the world’s stages with the likes of Boz Scaggs, Joni Mitchell and James Taylor, to name but a few. In between his demanding and often hectic schedule, he also finds time to record and tour with his own band, the Michael Landau Group. Performing Musician were recently granted a rare interview with Landau in which he discussed his illustrious playing career, his approach to performing and playing, as well as providing a look into his extensive rig. 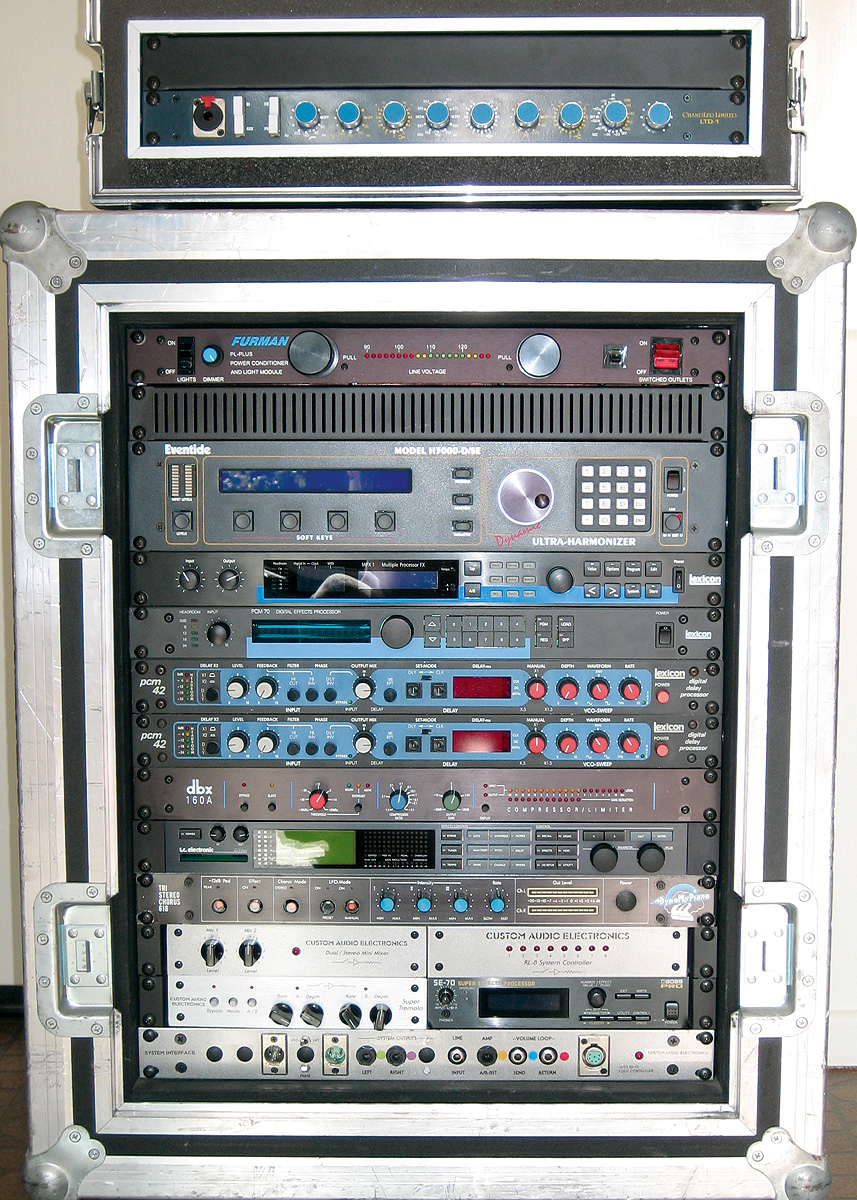 “For my studio setup, I mic the cabinet with a Shure SM57 through a Chandler Limited LTD-1 mic pre. That signal is then fed to the line input on the Custom Audio effects rack,” says Michael.

“Pedals before the amp are a vintage Tube Screamer TS-808, Roger Mayer Voodoo Vibe and a Boss volume pedal FV500H.I use this setup only for recording, because the line-level processing is after the dry cabinet. In other words, I insert the rack effects between the dry cabinet and the recording console.” 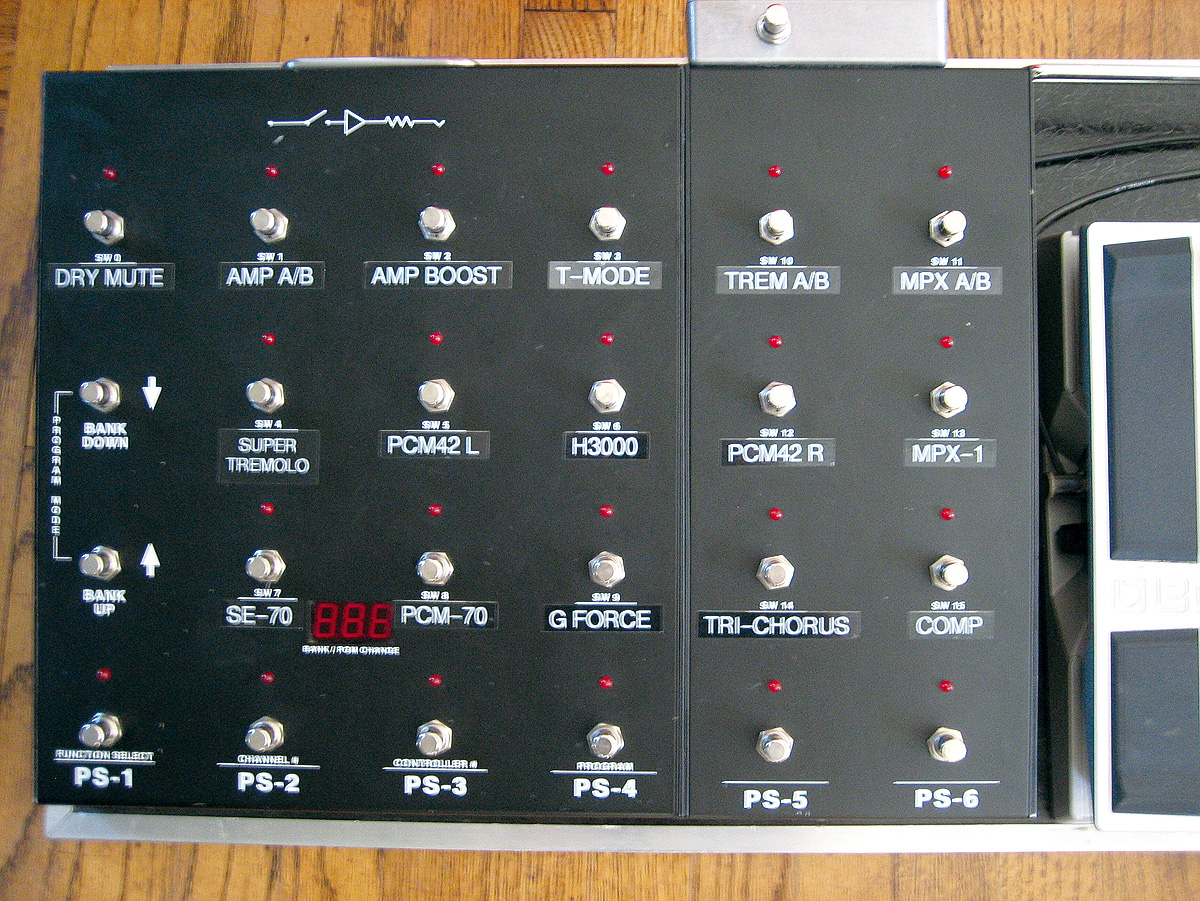 Live and in the studio, Michael mainly uses these guitars:

‘Wet-dry-wet’ rig and other live setups

“I also use a Lexicon MPX-1 processor in the effects loop of the amp with the Suhr MiniMix for reverb and delay,” says Michael. “Or I take a speaker level out of the amp to a Palmer PGA-4 speaker simulator and feed that to the Lexicon MPX-1, which then goes to a Marshall Valvestate stereo power amp through two Custom Audio 2 x 10 cabs with Celestion Vintage 10 speakers. Sometimes I’ll use a small pedalboard, as it’s small and easy to cart around. For that, all the pedals are before the amp, so they are a Maxon SD-9 Sonic Distortion, Roger Mayer Voodoo 1, Real McCoy Wah Wah (red), Arion Stereo Chorus (in mono, true bypass mod), Roger Mayer Voodoo Vibe and a Boss volume pedal FV500H.”