From the archive: Landau gear pix of the week.

Posts and excerpts from original thread.

Just stumbled across these two forgotten gems from the archives. I miss those days.. 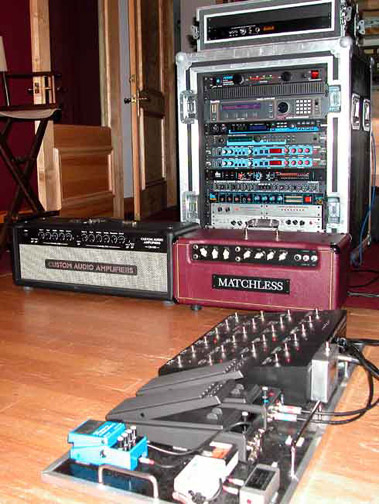 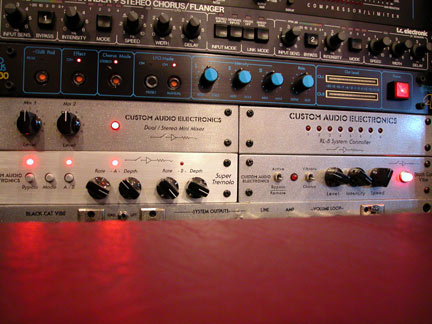 nice have you got more..?

Sorry.. just those from that session.

Thanks for the pics, Marsa!
Do you remember wich session/year they came from?
I´m looking for some pics i remember from the “Play like a Pro” website, i believe. You could see a Landau Wet/Dry System with a Bogner big 1×12 and Gold Tyler. Could it be Seal Tour rig? Anyone?
Happy New Year!

I can’t remember.. I think I got them from a guy on this site who was working on a session, (carting I think?), and managed to snap a pic of ML’s rig from that day. It’s a few years back. Can’t rememeber what it is was for.. a movie score? Don’t remember..

The Seal rig I remember was this one: 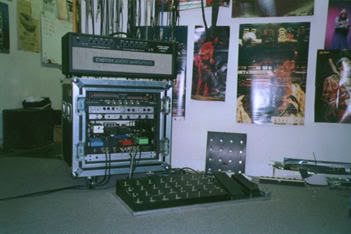 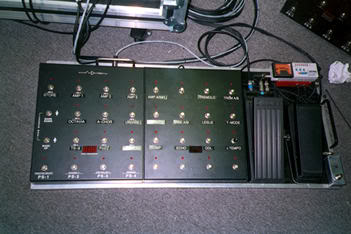 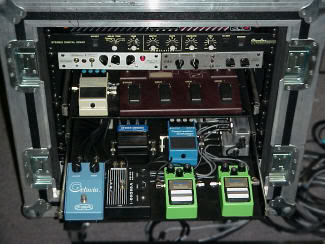 Most of the Playlikeapro site is still available. Remember which article the picture you mention was in?

I thought that he used a Guytron head on the Seal tour?

Yeah, certainly the Guytron is on the ‘Seal – Live at the Hard Rock” show
and was the mainstay of that tour.

Bloody great huge tones too on that one, despite the “Guytron doesn’t cut through live” internet pish.

Yeah, I remember all that bullshit on the internet back in 1999 regarding the Guytron amp……it was on Harmony Central I think…..some guy named Carl.

Anyway, I was at Bradshaw’s one day back in 2000, and Landau’s Seal tour rig was there……it looked like it had been “thrown” together…..the wiring was not neat at all….nothing like you’d expect to see today.

I think he originally intended on using the OD100, but changed to the Guytron either during the tour or right before. He did use the above mentioned rack though.

Could it be you’re thinking of this one and your memory is playing tricks on ya? This was on the Virtual Guitar Magazine page I think. Can’t find any Landau related on the PlayLikeAPro website, but there’s one article missing though.. 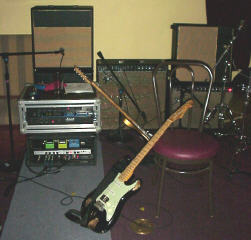 but the Stratocaster in the image, using the Landau yet?

I’m not sure if I understand your question, but the Strat in the picture is the black Japan made with the Tyler logo stamped all over the headstock.

he uses that stratocaster?or he sold it?

I’m pretty sure he still has it. Haven’t seen him using it lately though.. and the chances of it appearing are pretty slim with the new signature models etc. He used to bring out “cheap” stuff when playing clubs, like that one and a ’62 RI and a few Tylers.

I think he still has it as well although with a different neck and pickguard..

I’m still kinda bummed that he seems to have ditched the Tyler
connection completely and now even the Suhr guitars too – but then again
he has always favoured Fender throughout.

He needs to get the fire back

Geezer is gettin old.. grandpa Mike is heavy on the bison burgers and easy on the juice.
We’ll always have China Club though.

Indeed & thank god for all the bootleggers back in the day

Spot on, Marsa! Thanks a lot.
My tricky memory … getting old!
Could i remember more than one picture for this article or feature?
Thanks for updating my inner hard disk! 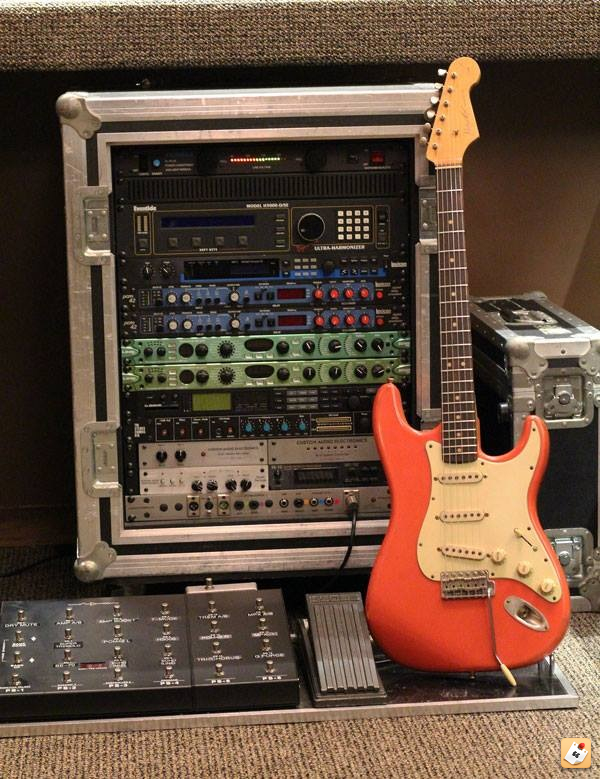 So I guess this is the rack that is going on the market. Got $$?

Yes it will be on the market soon. Time to sell a few things to fund the purchase. How much does a kidney get these days?

Some additional information from another thread related to the same topic above.

As stated before with 99% certainty.. this is his old studio rack which will be available for purchase soon. His new rack is much simpler. From his site:

Nothing replicates the TSC though surely…

The rack has Mike’s original Tri Stereo Chorus that he has used since the mid 80’s. Plus all his presets all the other rack units.

So, a rack with sounds on which he built his career.

25 grand? There must be a Japanese session guy out there who’d get a bank loan for this.

Or Pablo could trade in his rack? (Seriously, I vote Pablo as ‘Most Worthy’ to carry on this rack. Although Pablo’s too much of a man to use another man’s rack)

What happens when the last rack is sold?

Does the name of the forum change to “Huge Pedal Boards Inc?”

Oh, Moby! So nice from you. I would love to own the Holy Grail!

Marsa, looks like he is leaving the rack thingy altogether, for now.
I read this in Custom Audio Electronics facebook, some days ago:

Custom Audio Electronics We were planning a little one but he changed his mind.
October 11, 2013 at 10:57pm · Like

Some additional pics of Landau’s rack that John Shanks bought. 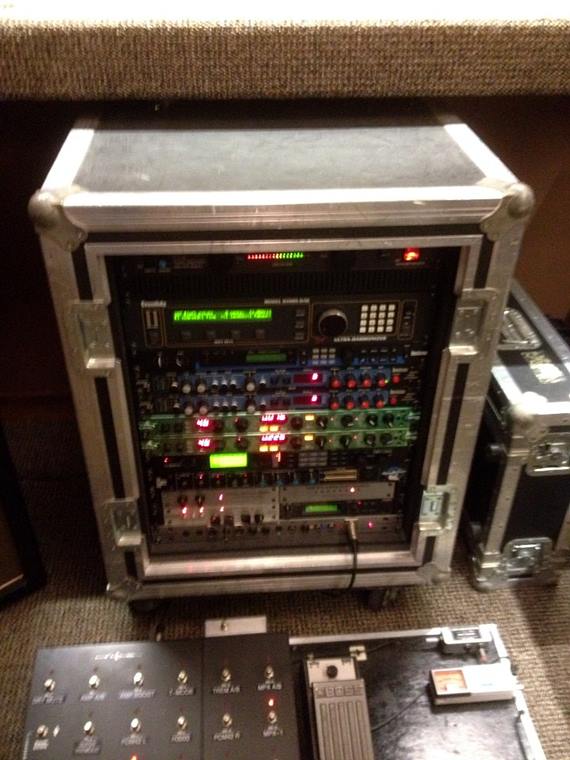 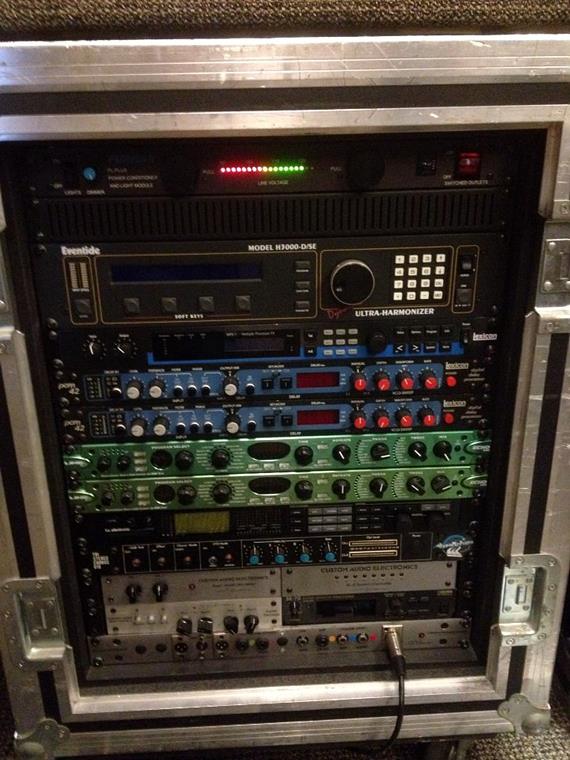 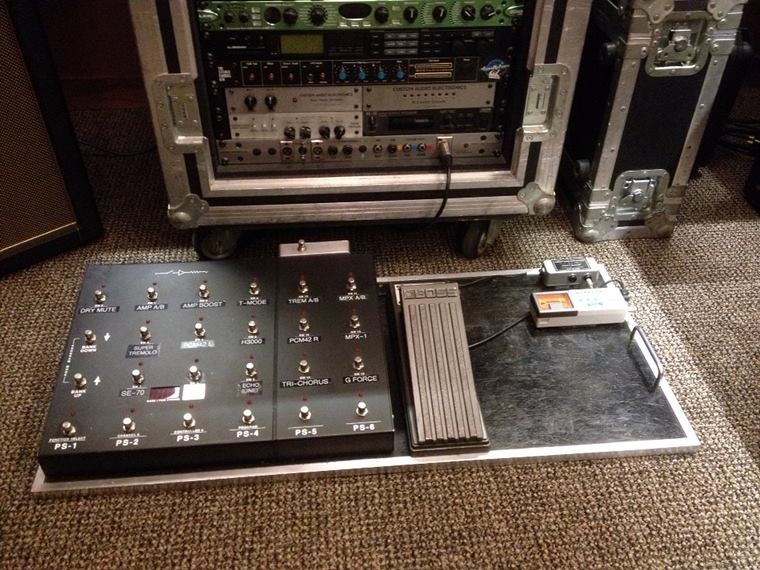