Some nice pics in this one in addition to some interesting insight from mr. Stevens.. including some fried brain cells. *Add grain of salt. 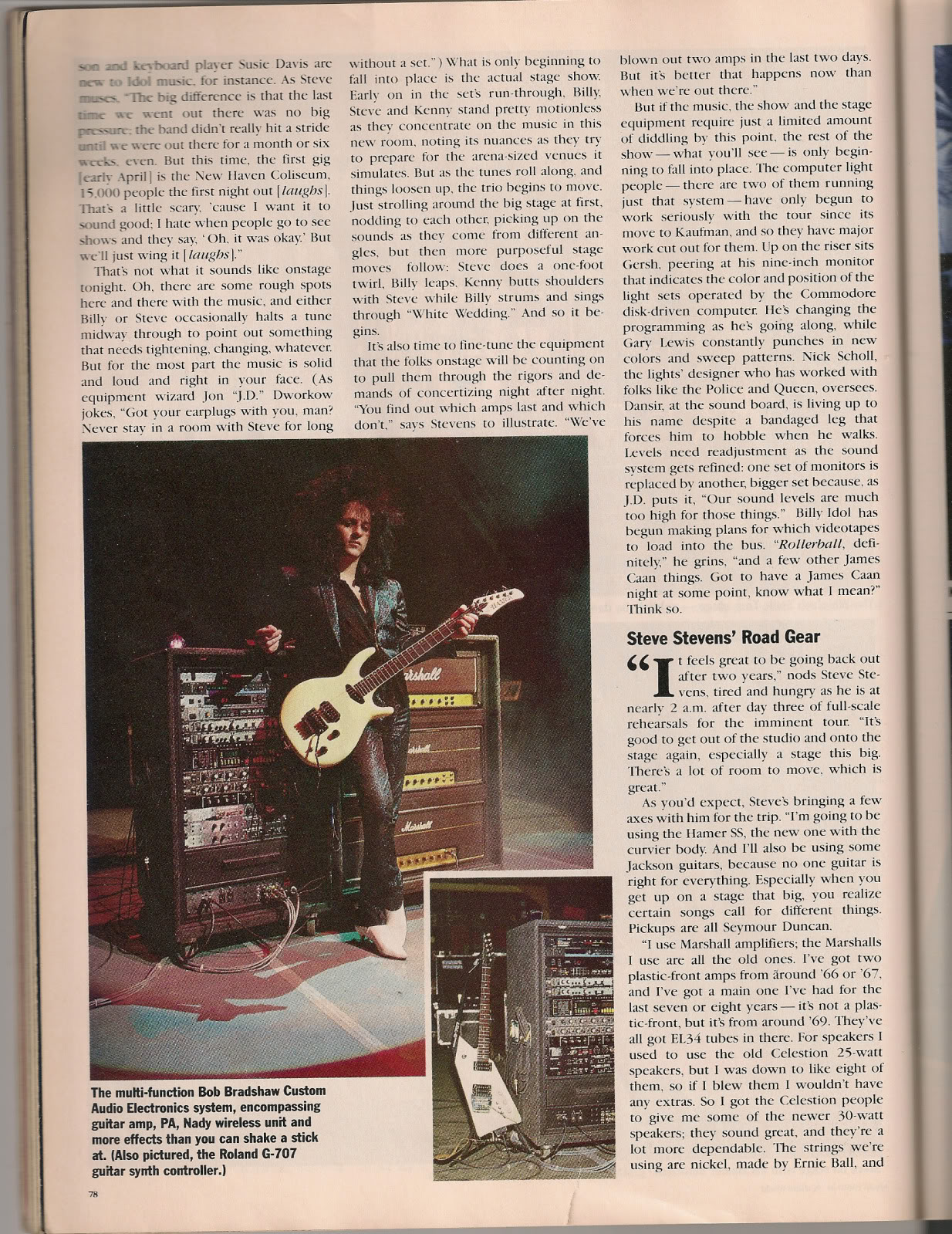 I loved this rack when I first read the Guitar World interview when it hit newstands in the early summer of 1987.

The only thing bigger than Steve’s rack in 1987 was his hair!

I’m sorry but there is just nothing sexier than 3 Marshall heads in a rack.

Thanks Todd, would you guys like some more SS scans, I have all the eighties and nineties mags. Even sent them all to SS himself 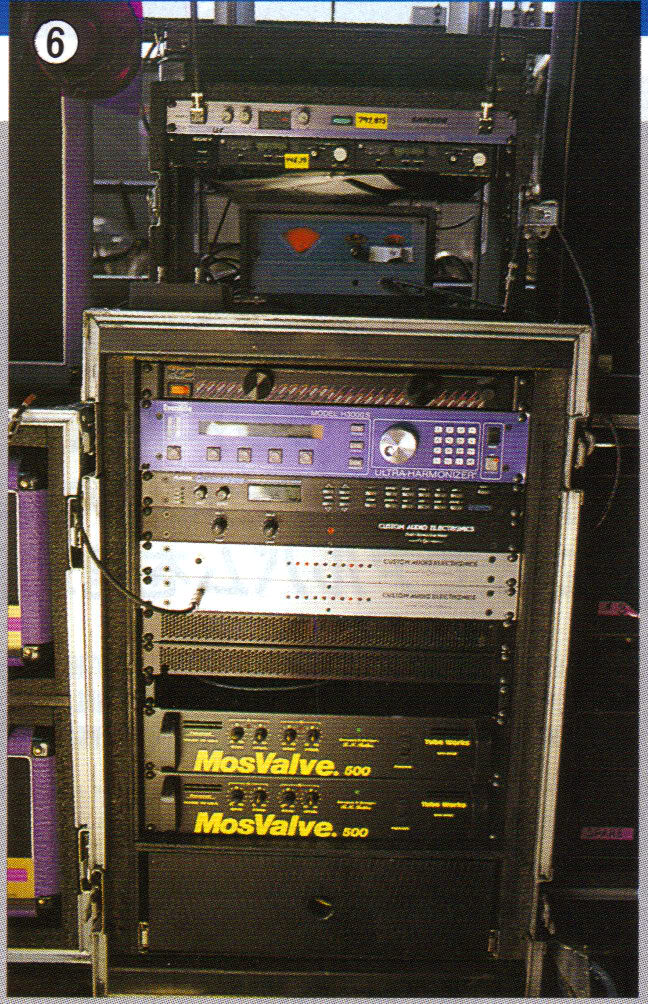 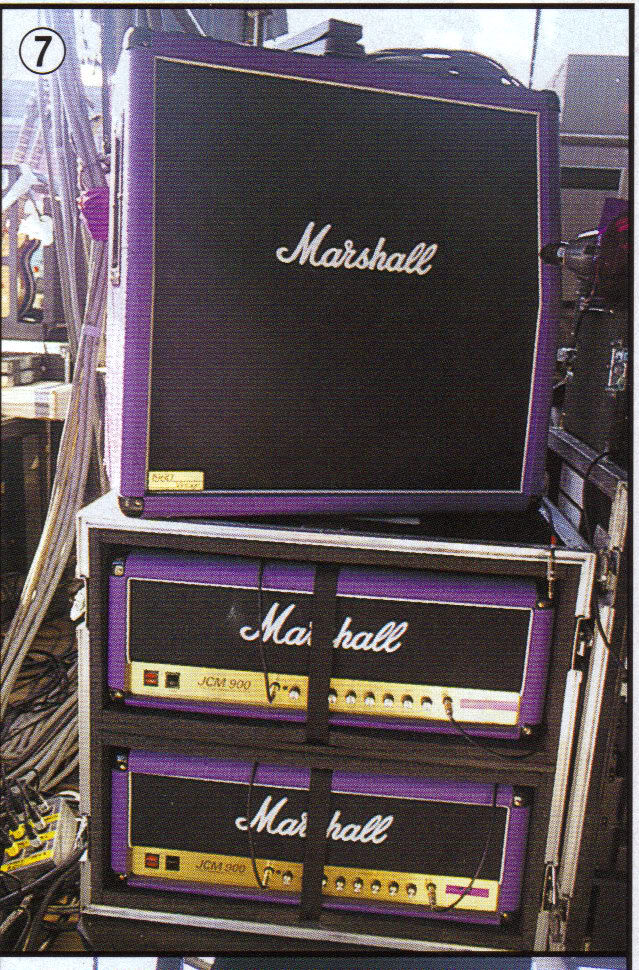 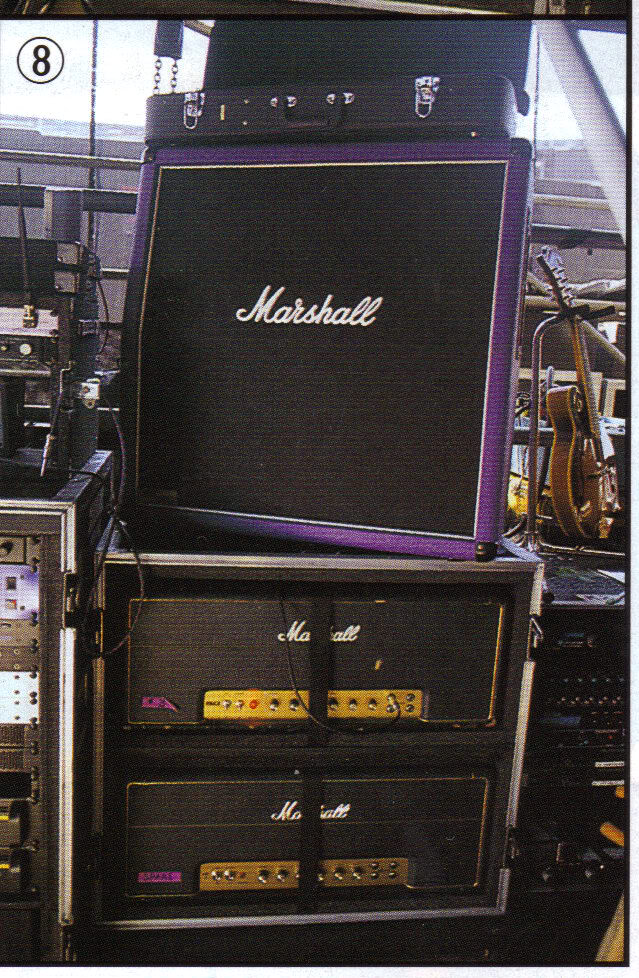 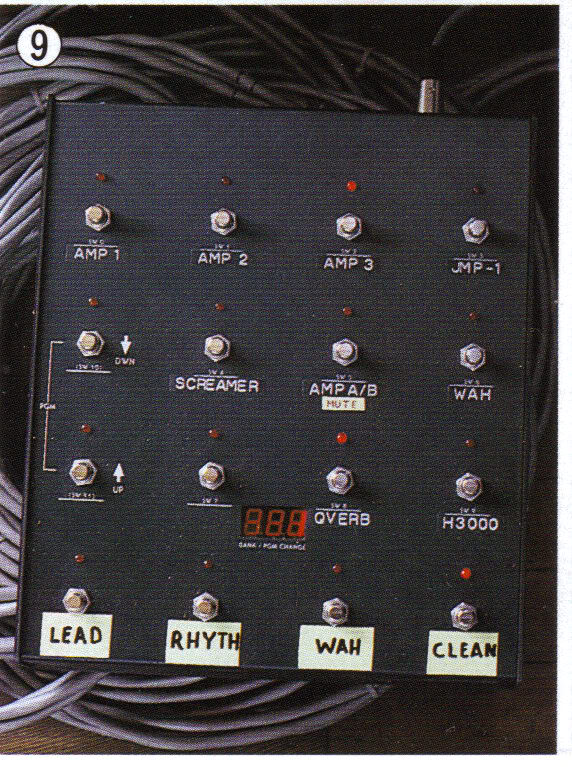 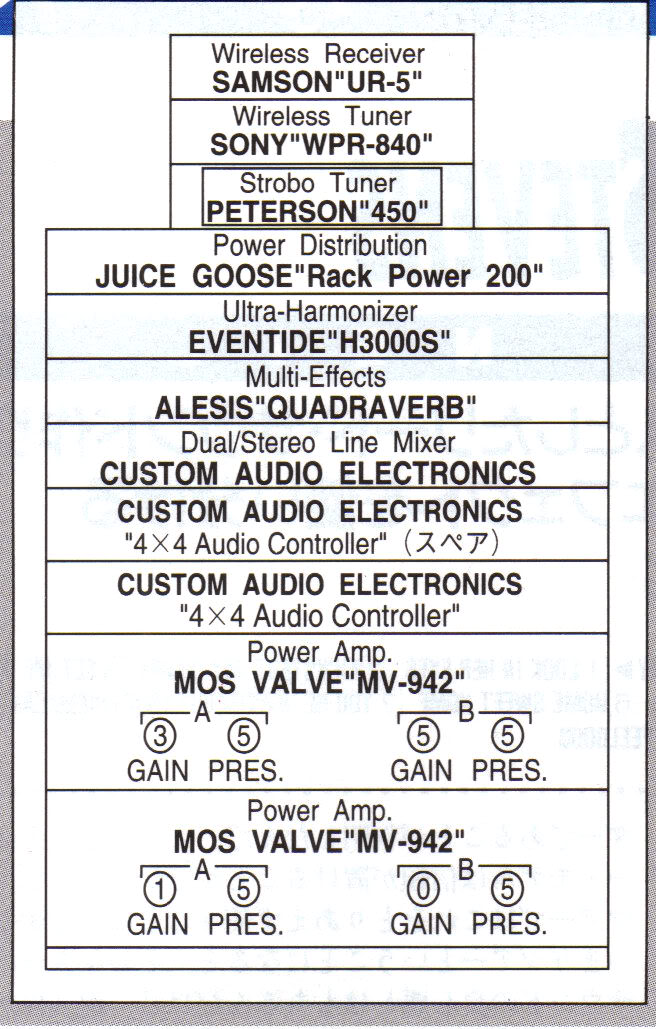 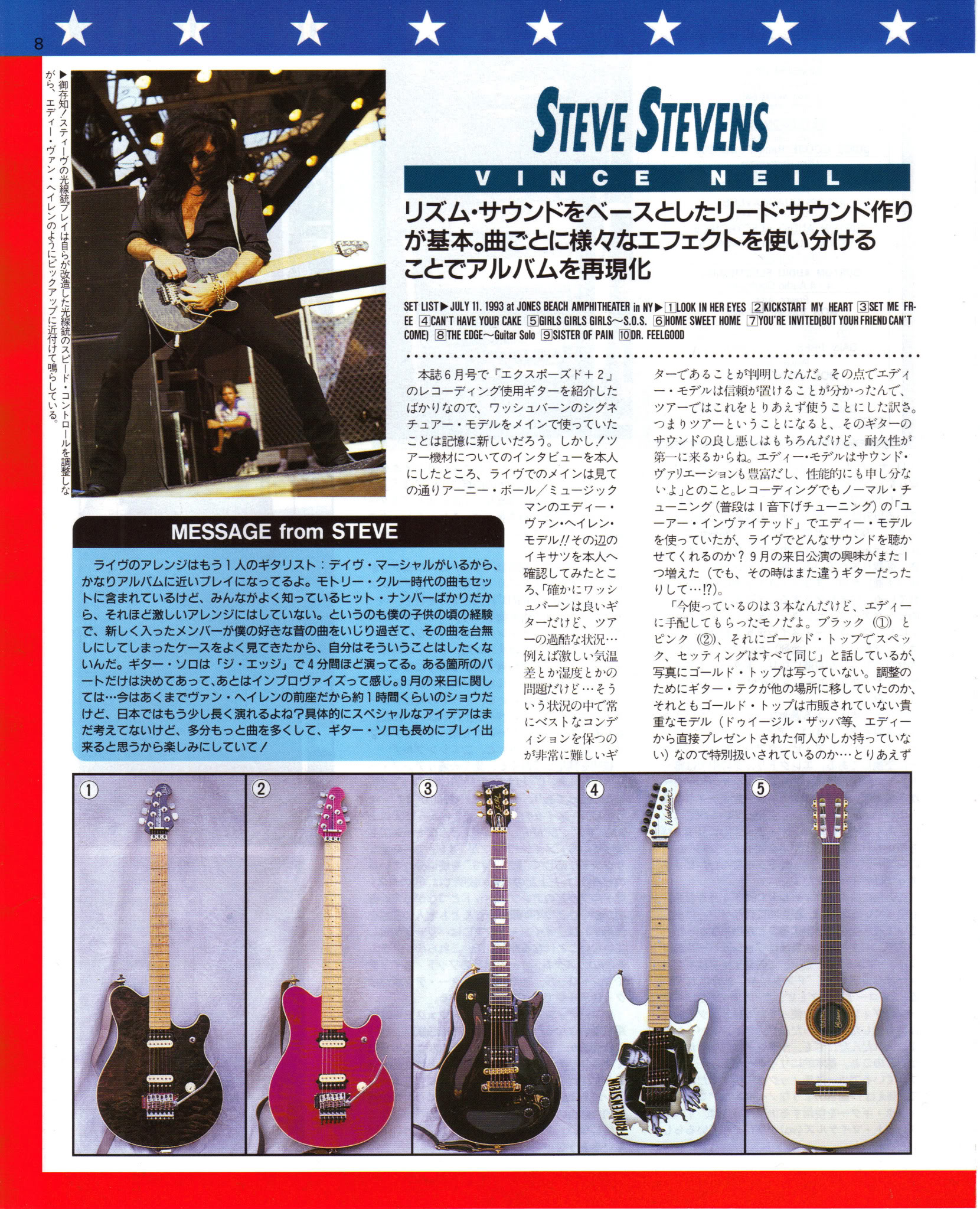 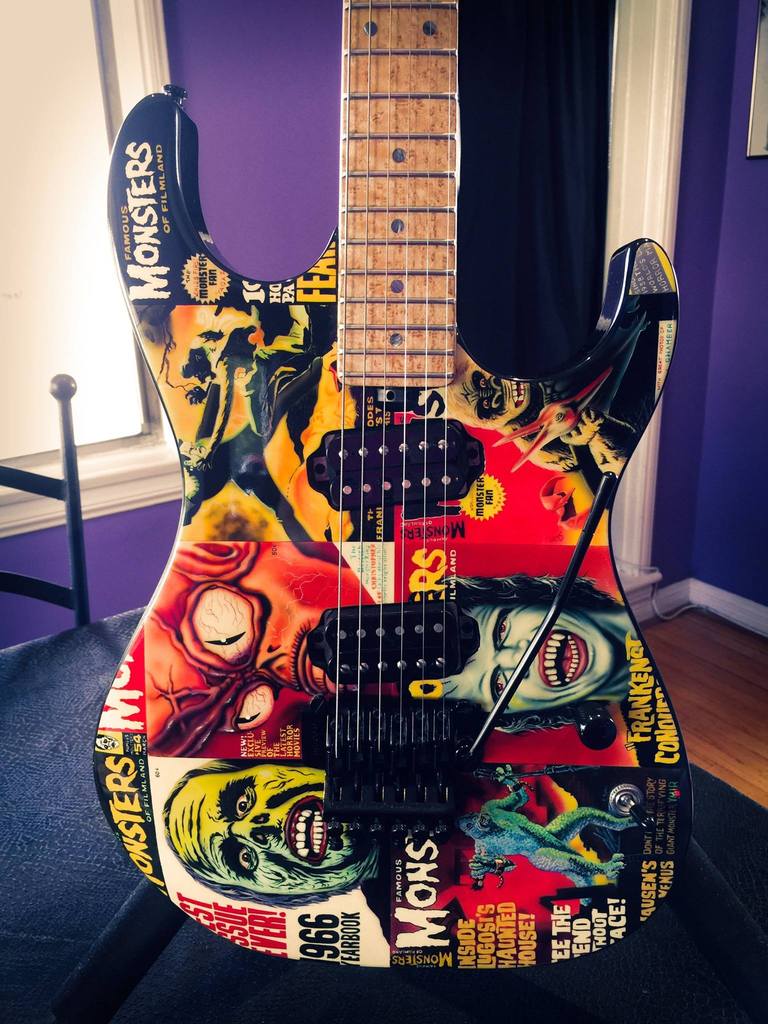 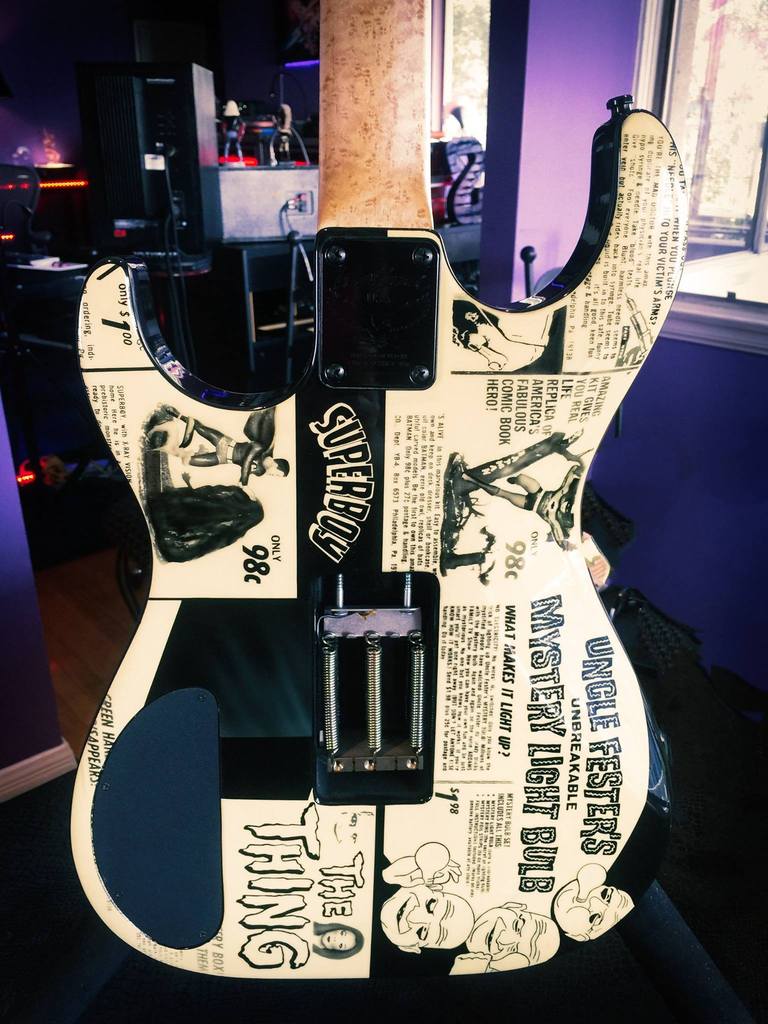 Hey Guys,
The photos marked 6,7,8,9 are def not my gear. As for the Lexicon PCM 70…it was set for pan delays and was kicked in for solos. This rig was probably the loudest thing i have ever played through, but extremely bright. It was usable on the Billy Idol Whiplash Smile tour as we were playing arenas but anything smaller, it was a sound mans worst nightmare. It was always a real challenge to get enough preamp gain on the Marshall plexy’s. I still own 3 but very rarely record with them.
Thanks,
Steve

Sorry Steve, I don’t know why those pics were included in the article about you.
I felt it looked kinda weird, sorry for putting out mis-information.
I’ll run things by you in the future first!!
I wonder whose rack that is?

Thanks so much for adding the archival photos, articles and video. And thanks Steve for checking in on this thread. Man, those pics of the original “Flintstone’s colors” Hamer bring back memories of some great times in the mid 80’s!

Hey Steve!
The distortion sounds really meaty on your recorded plexis (Atomic Playboys and Exposed)…what was different using them live?
I assume you didn’t use a power soak/power break like the old Marshall SE100 or Thd hot plate back then?

I wish I could step back in time to see what you did…or you would tell me everything…just me..no one else haha!

I’d like to add, love your new sounds too….I miss the old plexi dripping thing though.

Hey, did the Billy Idol tracks go up on iTunes yet?

Lots of interesting info Dave, and thanks Steve for shimming in.
I’m really curious about that ’87 rig setup, Dave / Steve could you please explain more into details how it was built and what was the signal chain? (details on that would be killer)
“Wet Dry Wet” type or fully loaded Marshall’s re-amp’ed in stereo with effects post amp’s? What kind of mixing? Always some “dry” amp tone mixed in parallel of effects in all cabs? etc…
Thanks again 8)

PS: at the same time if you can explain / compare with that setup you were using on the ’84 live records that would more than awesome. I just love the tone you got Steve on the “Flesh for Fantasy” tune from the “’84 live”. Killer

Hey Guys,
Let’s see what i can answer here. So long ago and many braincells have been burned since then, ha ha. So when i started the Vince Neil tour, i was using my 100 watt plexy. The main amp was a 1968 super lead. It was really not suited for the road and quite finicky. ED Van Halen saw me struggling with it one day at sound check and suggested i play through his rig at sound check the following day, which i did….much to Alex’s dismay, ha ha. He just wanted to get on with the VH sound check and drink his garlic shakes. I express to Eddie that it seemed much more road worthy to use the Peavey stuff. I also really liked his WDW setup. 2 days later a truck shows up at the gig and i was a kid at Christmas time. 6 cabs & 3 heads. Ed also placed an order of 2 Music Man EVH gee tars. I told him that i loved the solid black one i had played of his. He pulled it off his guitar rack, handed it to me and said, “oh you mean your guitar” That’s Ed for you. I had already owned one Music Man EVH prior. It was trans pink and i had recorded much of the Vince Neil Exposed record with that. For the 1984 Billy Idol Rebel Yell stuff, i played through 2 JCM 800’s. I could never get them clean enough for Flesh, so i had a switch that would route my guitar to a Rockman set on super clean/compressed. That was sent to the sound man DI. It was then routed to my monitors. Up until i hooked up with Dave Friedman, i used a Jose Arredondo load box to send a line level signal off the Marshall to the H&H power amps. All of my systems at that time were done by the pioneer and guy that paved the way for us all…Bob Bradshaw. BTW, i think the photos of gear i stated that were not mine are of Dave Marshall’s gear, he was the 2nd guitarist in the Vince Neil band.

Thanks for the detail and cool story about EVH! If you have the time, I have two questions to add to the mix:

The signature amp with D.F. is based on the 100 watt Marsha i have toured with for the last 2 years. We are now adding a super clean additional channel. The appearance is still being sorted out. As we get closer, i will do a post and demo clips.
Not sure what you mean about ghosting notes. Explain what you are hearing. I have found in the past that sonic issues with note purity can be attributed to speaker and cabinet issues. When i switched to my Scumback cabs, all of that false note and standing wave crap went away. That particle board stuff can cause huge headaches.

Hi David,
Dude, i had no idea how deep into the whole Marshall this you truly were. All the posts and effort are really appreciated. I have a working musicians understanding of amps, hell i can’t even bias the sucker….so i find it really interesting to read all this stuff. I stumbled into amp modding in around 1976. I was in a cover band and the sound man allowed me to use his Hiwatt’s. We found them to be too clean to replicate the tones of some of the music i was playing…the usual stuff Zeppelin, Tull, etc. We set out on a quest to get more preamp gain happening…the rest is history. I got my first Marshall in 79′. That amp still record with and was used on Rebel Yell. Henry Yee in NYC installed a really good master volume and swapped out all the tube sockets to ceramic to avoid arcing. 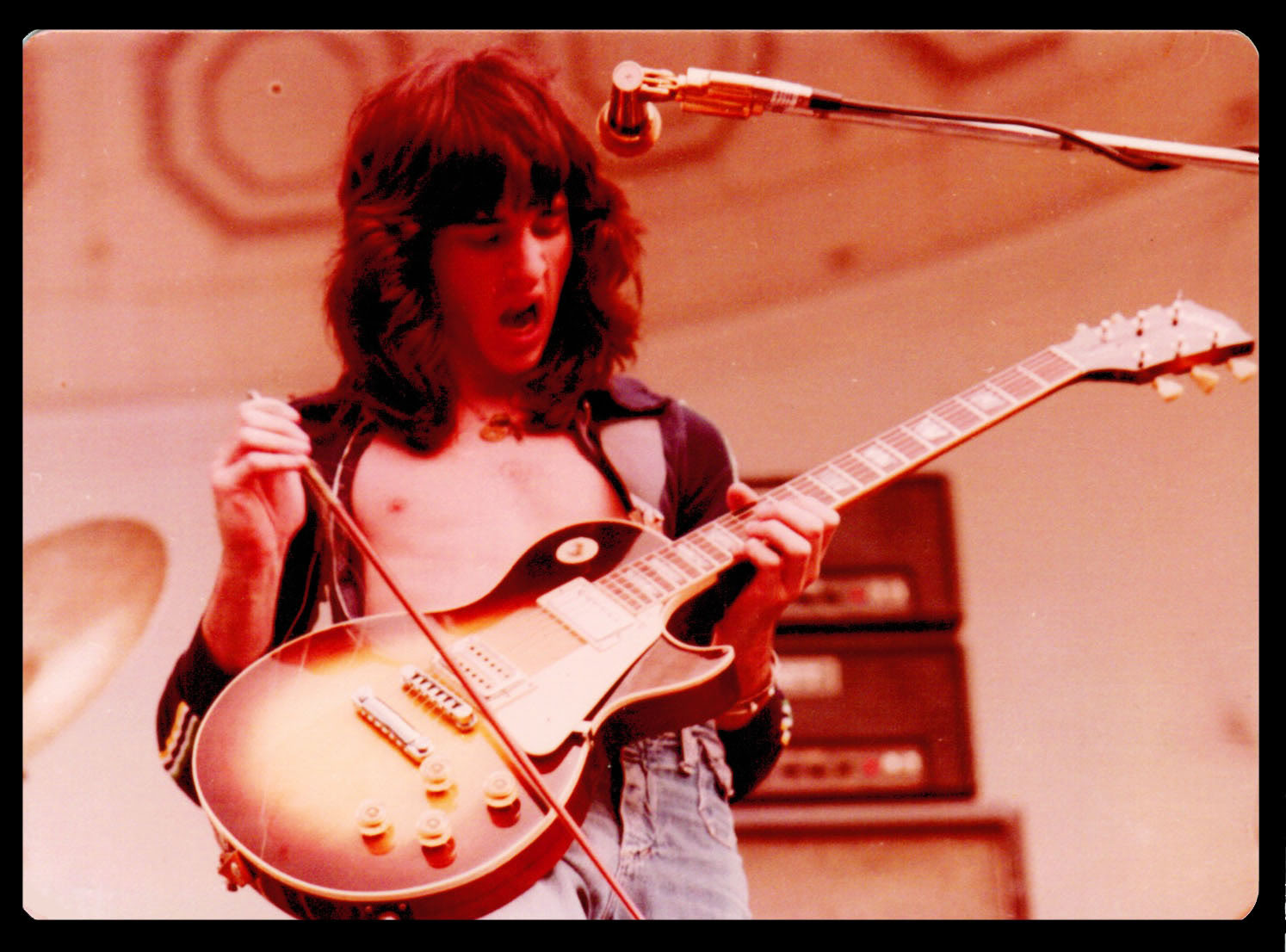 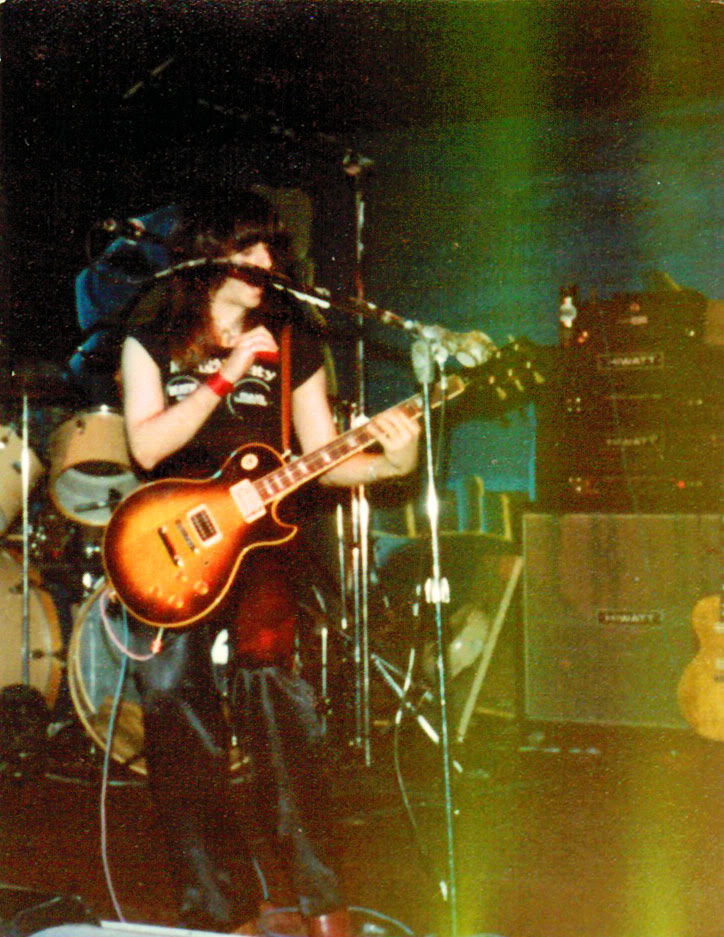 The rig in those pictures ( purple marshall heads ) is RICHIE KOTZEN ‘S RIG!

Sorry but they belonged to Dave Marshall the second guitarist in the Vince Neil Band.
Steve himself confirmed this and I got the photos from a Young Guitar auction I won.
yngwie308

Sorry, I have the whole young guitar magazine for these info. And it is clearly Richie’s rig. I will post steve steven rig from the same magazine soon to proof that. My scanner might ont work properly but I will take a photo and paste here.
Stay tune! 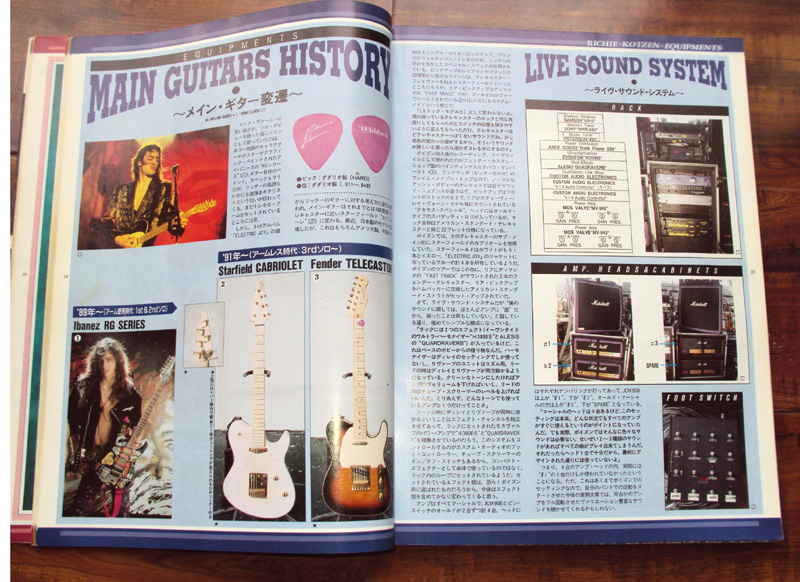 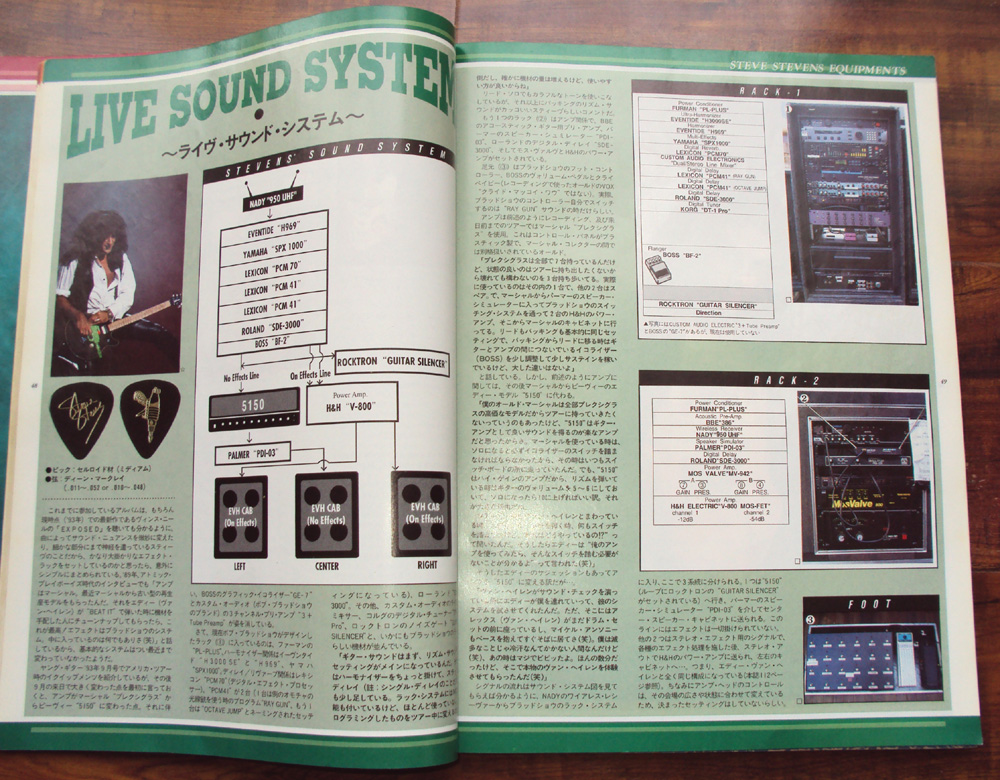 THANKS CHAK!! I only have an insert from the magazine that I won in the auction YOU ARE ABSOLUTELY CORRECT thanks for the pics.
I don’t know what I was thinking, pleading the 5th on this.
I stand corrected.