Here are some posts from a thread started by Steve Stevens with some cool info. I’ve left out the majority of praise and classic HRI banter.

Rig Rundown from the 2013 Billy Idol tour. Not responsible for the audio distortion. Let it be said….Yeah, i play loud….seems like i overloaded their mics.

hey steve, nice to see the axess rx1 is still in there!

What about the rest of the rack? Eventide, Line6 etc…?
Cool rig rundown but not compete

Hey Guys,
I actually explained every piece of gear in my system. It was quite a long filming, so i would imagine…due to time, Premiere Guitar chose to use what they felt was most important. Please note that they did not mic up my outside offstage cabs, so you are not hearing things like harmonizing and delays for “Flesh For fantasy” etc. I do think however, they did a great job and couldn’t be nicer guys. I also want to point out that doing Billy Idol shows affords me the luxury of schlepping around this NASA sized system. It’s part of my job to replicate our catalog as closely as possible. When i do dates with Kings Of Chaos for example…i bring a couple of Friedmans, small pedal board, and about 3 guitars. The promoter supply’s the back line. It’s a blast to play through this puppy, but i enjoy a stripped down situation as well.

I’ll share this with you guys….because honestly we’re the only people on the planet that geek out on this sort of stuff, ha ha. So in 1978 I was in a cover band playing Long Island. I built my first pedal board, having been inspired by the photo of Steve Howe’s pedalboard in the Yessongs booklet. There was only one company at the time that built power supplies, but with only 3 taps. I eventually got 2 and housed them in the unit seen. I played through a Hiwatt pyramid like Townsend. So, yeah, been at this a looooooong time. Still love gear. 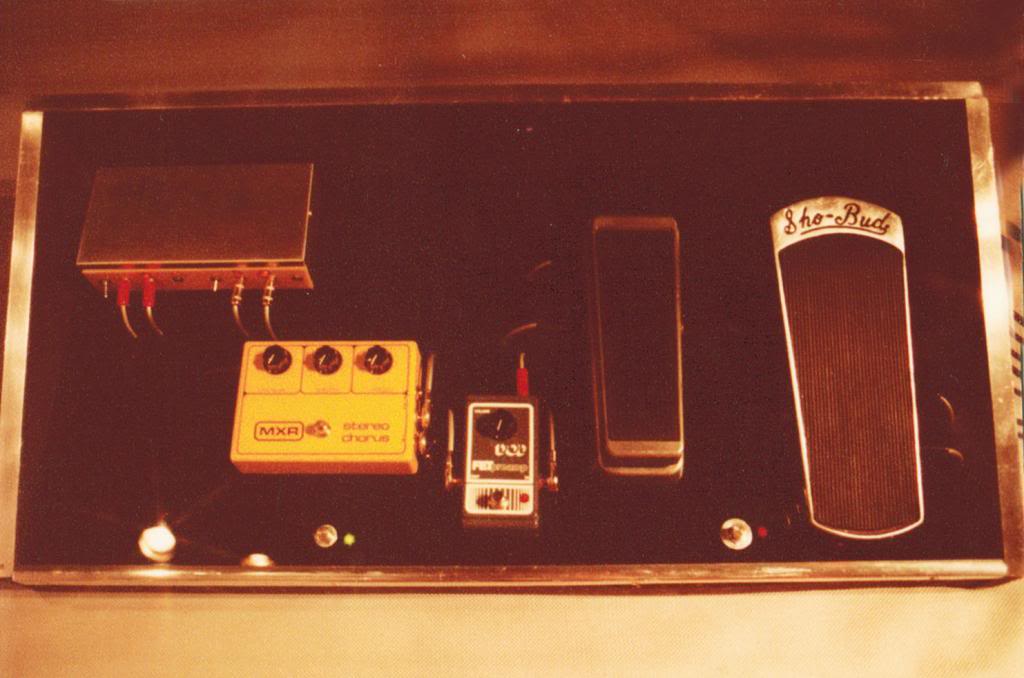 Lack of trolls makes this board great. TGP….i stay away, LOL

SHit I’m a TGP Mod and I hide over here.

Steve, I’m a little cautious about asking but, what the fuck, how did you develop and then maintain your persona (black nails, big hair, cigarette hanging from the snarl, black stuff, etc.)? You pretty much look and dress the same as you did 25-30 years ago (in a good way). Not many guys could pull that off with any degree of credibility. There’s certainly only one Steve Stevens.

Do you ever want to show up on stage in tan pants, a bowling shirt, a goatee and sporting a backwards baseball cap and Nikes?

I think the reason he can pull it off with credibility is because its genuine, it’s real, it’s who he is. If he was putting on a bullshit routine people would see right through it, but its not a routine. He just happens to be really cool naturally, good for him!

To pbhtrip….
Huge thanks for the very kind words brother. I think you just have to be yourself. When i first started playing guitar, the guys i loved had strong rock and roll images, Hendrix, Richards, Zeppelin….then Kiss & the N.Y. Dolls hit. Living in NYC, those bands were our Beatles & Stones. I guess it just stayed with me. Stepping onto stage with Billy Idol, it’s important to entertain…that’s part of what folks pay a ticket for (quite a number are females at that). Rest assured, when i am off to the grocery store and not on tour, i don’t rock leather pants, well most times not, ha ha. I guess there are some guys that don’t dig my vibe, and that’s fine. I learned a looooong time ago, you have to make yourself happy first. Be true to what your own vision is, that may be a nasty ol’ t shirt and board shorts, as long as it’s your choice. When Nirvana hit, there were label guys telling everyone to wear flannel etc. I’ve seen enough styles come and go to know that in the end…what comes out of the speakers is really all that matters

Steve ~ on the black and white photo that has the “echo/bypass” switch, what was the echo being used?

When i used that board i had a Maestro EP4, the one with the LED’s. Good sounding delay’s but not the best preamp in those. I was lucky enough to have a soundman that owned 4 Hiwatt cabs & 2 heads. We played alot of Yes, and Zeppelin, so those clean amps were very well suited. These were the day’s before you could easily find a guy to mod amps etc. I owned a Simms Watt half stack. These were really cool but also super clean. I brought it to some guy to mod (to give me some overdrive). He destroyed the amp by gunking up the entire circuit board with silicone. It sounded like ass and looked like it too. I was lucky enough once i joined Billy Idol to meet Henry Yee who was just amazing. He was doing all the same stuff in NYC that Jose was doing in L.A. Line out’s and very good master volumes.

Was def. not Harry Kolbe with the gunk work. This was years before i knew of Harry. BTW, Harry never really did any work for me that is significant. Might have sent an amp to him as an experiment, but any of the stuff i recorded with back in the day was always done by Henry Yee.