So, if one was to do a Landau rig with tones from Tales & BW

Excerpts and posts from original thread by marsa

I’ve been thinking about doing a rig that echo the tones of Tales and the Burning Water era. (…)

I guess I need to emphasize, for those who might not know me, that I do not expect to sound like Landau, or EJ or Hendrix.. Those are the sounds that inspire me and it’s what I like to use as building blocks to build my own sound. To put it another way.. I like to use the same colors, but I paint a different picture.

I had a cool idea, which results in a lot of gear though.. but this thread would be a good place to share. Picture this..
You have three 2×12 cabinets, two Blackface clean sound heads and a Marshall head.
You run stereo into the two clean heads which feeds one 12″ speaker in each outer 2×12 for clean sounds. For drive you switch into the Marshall which feeds the middle 2×12 dry and you tap a line out of the Marshall, through delay and verb, and into the remaing outer 12″ speakers wet. That way you would always have a very wide sound, huge spacy cleans and a super direct thumpin’ drive, but with added stereo ambience.
Tres cool? Yes

First, you need to find an over-sized orange blazer.

Yup.. such an essential part of the Burning Water sound for sure.

(…) I’ve come to the conclusion that I don’t think it’s possible to cop all those tones into one compact rig. A 20u rack would do it.. with all the bells and original whistles.. but.. I think you can get at least 85% of the way in a more compact rig if you drop the super hifi chorused clean stuff. I don’t think I could live with the pedal alternative.. I’ll play around with it some more, but I’m pretty sure that it won’t be worth trying.
The rest of the sounds on Tales and the BW albums are pure Marshall overdrive and bold spankin’ clean Blackface clean tones, bathed in lush reverbs and vajazzled with beautiful delays. Now, that should be doable.

You should do this setup. For the outer speakers, why not use 1x12s?

Because your clean sound is using up one 12″ speaker in each of the outer 2x12s. See the diagram I made below. When playing clean you are just using the outer 12s. When playing dirty you are using the middle 2×12 and a line out from the Marshall goes to the rack and out to the remaing two 12s in the outer cabs. 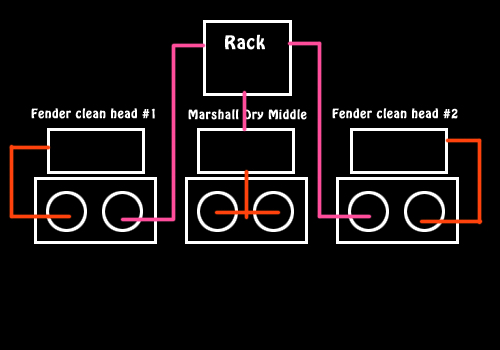 But, that’s a wild setup. You’d need a reverb, dly and chorus for your clean and yet another reverb and delay for your drive. You would also need 5 mics to capture it all in a live setting..

The rest of the idea for the above setup is of course a DBX160a, H3000, Tri and some sweet reverb and dly in the loops of the clean amps and then a good multiFX with reverb and delay for the wet cabs when running the middle Marshall. Add a pedal shelf to that rack with the usual suspects and you’re ready for world domination. You will also be broke and never get to use the damn thing live, but your livingroom will be bathing in beautiful sounds!

Another route is the slaving idea.. which I almost went for.. but after doing some testing with slaving I was put off. Here’s why.. if you slave a dimed plexi for crunch and lead it sounds awesome. But the beautiful sparkly clean sound that a Plexi can produce by turning down your volume control is lost when slaving. The airy highs are gone and the it sounds flat and dull. This means that you would need a different source for your clean. Enter the Alembic or Sarno Music Preamp. Fender cleans in a 1u preamp. So that in one loop and a slaved plexi in another. Run that through a fridge of goodies, add a shelf of funky pedals and cram the whole shebang through a Matrix poweramp and into a stereo 4×12 or two 2×12 or whatever and it’s the shit right there! That rack would grow big fast though..

Is this rig for live or for recording? If you’re recording then just run all the grease/fx in parallel after the mic pre and you won’t need wet cabs. I have an API A2D and a MPX-1 in a 2U rack, the SPDIF out of the API feeds the MPX-1, and you get 3 XLR outs: One from the API and two stereo wet outs from the lexicon. Perfect to drag to sessions.

Ever wonder how many hours mike put in to achieve the tones and gear formulas he arrived at? How much Bradshaw influenced him? Landau and Huff rack tones still top my recorded tone list. Holdsworth and EJ are right there as well.
I feel good about the fact that I personally begged Mike to resurrect the tales rig for a future record after a renegade gig last year—doing my hri duty!

Who discovered the pcm/2290/eventide/tristereo grail pieces first for guitar rigs?
I love those tones best but am content with a simpler pedal/gforce w/d(w) rig for organic front end and post amp tc chorus/delay/verb spacial imaging

Where is the 2nd SM26? In the back? Not visible from the front.

Is there any information about this black Tyler?

The old photo makes it look black but it’s what Jim calls Midnight. It looks black from a distance but it’s kinda dark blue with sparkles, looks best under light. I was at Jim’s shop placing an order and he showed it to me, said it was going to a Japanese buyer if I remember correctly, had all the switches. I think Jim said this guitar was all the Wilson Philips stuff, along with other records during that time.

Now, if this is different guitar pictured and is really black then I’m wrong. But, I don’t think so. Been a long time ‘ya know?

(…) He had also a red studio elite you know anything about that guitar too?

Damn, forgot about that one. Yeah, Jim showed me the body, it had a quilt maple top in a trans red finish and said it’s the new one being built for him. That’s about all.

Is anyone able to confirm or deny the presence of a second SM26? It would seem a foregone conclusion, however it would be nice to know. My guess would be it’s mount in the back.

Another theory would be there’s some spec-built, prototype, custom ‘thing’ someplace. Anyone?

My guess is the Bradshaw switcher has some sort of mix function and served as ‘mix 2’ for the PCM70. Somebody tell me otherwise please.

There has to be one extra mixer in there, either in the Bradshaw switcher or in the back of the rack.

I think I figured it out. Based on the ‘1988 Guitar World’ article – with a diagram of Luke’s rig (Luke had mod/rev/dly in mix 1) – I think this would have been Bob’s approach: 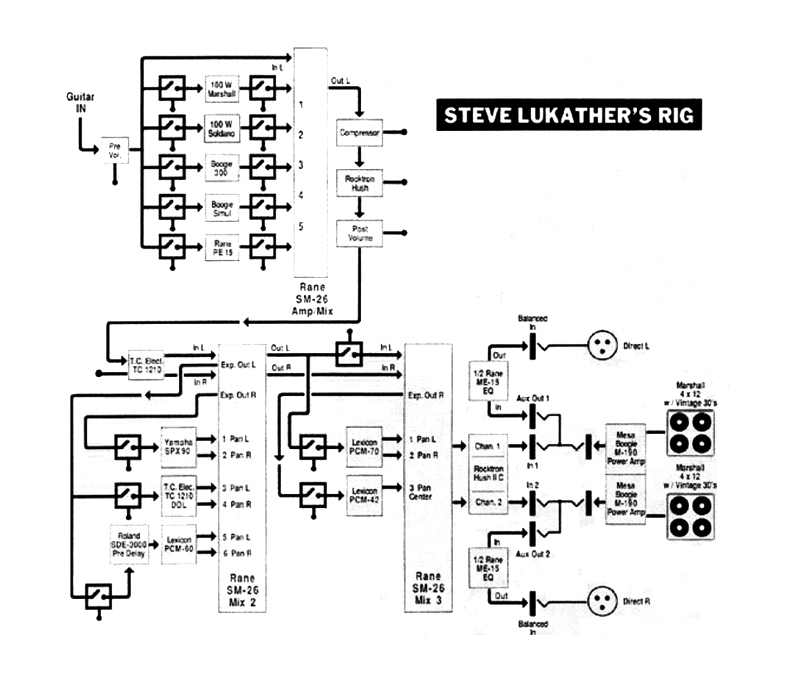 Pretty straight forward actually. Now if I can get the chops together none of this will matter lol

Disclaimer: This is all speculative based on research of available data. This is also ONLY the TFTB rig per the CD booklet photos.

I’ve also heard there was a Dimension D stuffed in the back? Never had that confirmed though. (…)

Yeah, I´ve heard this too. The Dimension D isn´t as wobbly and supposedly works sort of like the detune.
But then again I´ve always thought a fair chunk of those tones sound most like the Yamaha symphonic chorus.

The Roland RSP550 does a very good Dimension D to my ears. I keep one around for that very purpose even if I don´t have it on active duty in the rack.

I have an SE70 that also has some good Dimension sounds