This is another interesting one. Notice the dates from when Steve posted and when the auction got an update.. Oh, well.. I guess everyone is correct about some of it at least.. uh, say what?

I loved his tone on the Eat them and smile record. Kinda unique for a marshall sound I think.

**Editors note: The auction in question is long gone, but I’ve added the text from the listing and some pictures found online of the amp. 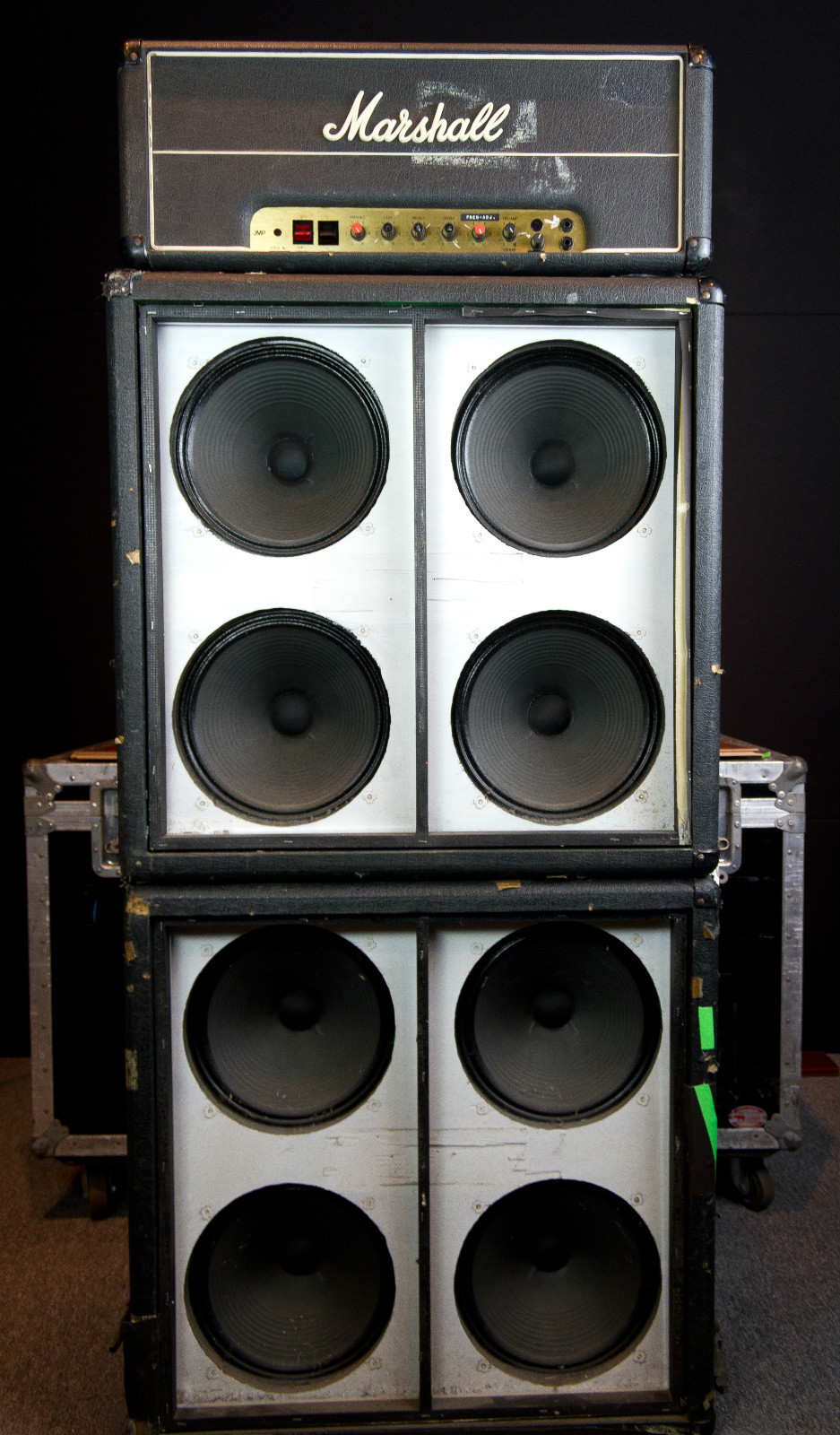 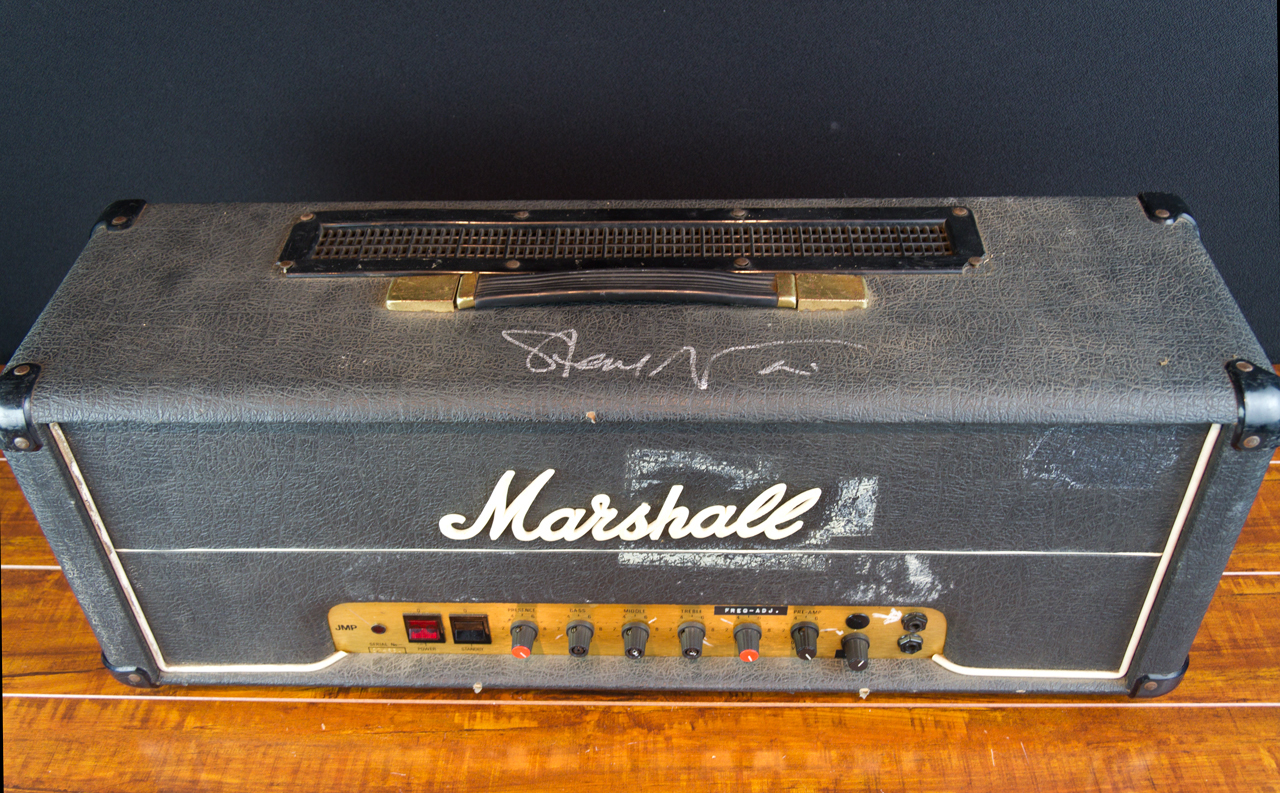 The 100 watt Marshall JMP was given to Ted Templeman by Steve Stevens during the NYC recording sessions for “Eat Em and Smile.” The amp was then modded to Steve’s liking by Lee Jackson, famous for performing sought after custom modifications to Marshall amplifiers for top artists in the 1980′s and 1990′s. It was Steve’s main amp for the “Eat Em and Smile”sessions and used on the entire David Lee Roth tour. The 100 watt plexi head features an extra gain stage, frequency adjust control, effects loop & master volume. The head has been well maintained in Los Angeles and features matching Drake transformers, KT88 quad-matched power tubes & hand-selected pre-amp tubes to Steve’s liking.

The twin 4×12 cabinets are outfitted with Celestion Vintage 30 speakers made in Ipswich, England. Both cabinets bear Steve’s signature, certification & are in perfect working order. This is your chance to bid on a historical piece of equipment used by a legendary performer in their international breakthrough role. This is an official Vai.com auction. All questions will be answered as promptly as possible. A portion of the proceeds will go to he Make-a-noise fund, a 501.3c which provides musical instruments to cultivate and preserve musical awareness, development, and education.

Local pickup in Los Angeles is preferred, intentional shipping is available. Buyer to pay packaging and shipping costs. Click on an thumbnail image below to see detailed images.

Two clarifications on the above description: This is indeed the amplifier used by Steve Vai on the “Eat Em and Smile” record & on the David Lee Roth tour but was not lent to Steve by Steve Stevens. The amp is a 70’s Marshall 100 Watt JMP, not a “Plexi.”

I can tell you that the Marshall used on the Eat Em & Smile album was not this. I would know. I supplied the gear for the record. Got a phone call from Ted Templeman asking if i’d help supply Vai with some real deal Marshall’s, as Ted wasn’t happy with what they were getting. I sent over 2 Plexy’s. They stayed with Ted until the record was finished. I was thanked in the album credits. There is some more stuff regarding Dave’s first record and exit from Van Halen but let’s just say that i felt Vai was the perfect guitarist for Dave.

thanks for confirming the story steve! i’ve heard it before, and it makes perfect sense, since it is probably the best tones he’s ever had at least for that kind of rockin’ out stuff. yankee rose in particular has some pretty awesome tones on it.

(so you and billy s. were the first one to be approached by dave, right?)

Steve, I had heard that you were Dave’s first choice as well — that would have made for an interesting pairing! But. . .I have to say, thanks for NOT taking the gig! I really liked Vai with Roth. As you say, I thought he was perfect too!

Also, I have to say, I REALLY love hearing your stories here, and really appreciate you dropping in now and then.

At the time that i was contacted by Ted Templeman, his quote to me was that they couldn’t get what they were looking for with Steve’s gear at the time. He asked what Marshall stuff i had and i said, i’ll just have a couple of plexy’s delivered. I knew Ted as he had just signed me to Warners yadda yadda. When we next spoke, he said that he was really happy with the stuff i sent over and they had finished tracking. Now in my experience, you never used just one amp for recording, and i def don’t want to muck about with Steve’s amp sale, but as i said, my gear was absolutely used for that record.

there are definitely different tones on eat em and smile. several amps where probably used, of course. what the hell do i know? i was just a swedish fan learning to stroke my dick at the time. (…)

Eat’em is such an epic record. One of my all time faves. Ladies’ Nite thrones for me.. the vibe of that song is amazing. Gives me chills every time..

You know, these could certainly be legit. The signature on the cab says the rig was used on the EAS tour (doesn’t mention the album). Maybe the seller made an assumption about the recording. (…)

Hey Guys,
Obviously the cabs were not mine. Reading the description on ebay…i’m simply saying THIS was not any amp i owned or gave to Ted Templeman. I was fanatical about getting late 60’s 4 input Marshall’s back then. There was a guy in Chicago that i bought 6 of em’ from. I can’t remember his name but he had some incredible stuff.I had Dave Friedman sell 3 of those a couple of years ago. There was one amp that i owned that only made it onto one recording, a remix of Idol’s To Be A Lover. It was the absolute best sounding Marshall i ever owned. Sadly it caught on fire at the end of the session. I wish i knew Dave Friedman then, perhaps he could have saved it. We sold it. It’s heard at the intro here….. (Billy Idol To Be A Lover)